One of the strengths of pointers is that you can do basic arithmetic with it. Though arithmetic may originally mean mathematical operators; for pointers, only addition (and subtraction) are defined.

You can compile these at Coding Ground.

In memory, it looks similar to the following: 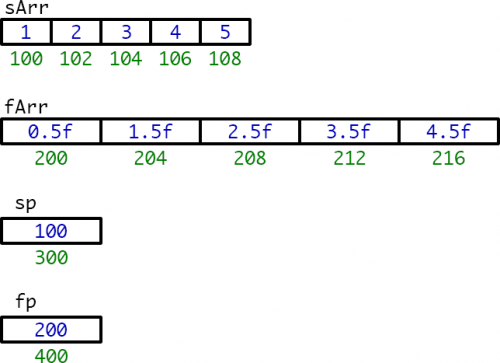 Notice how the value of sp is the address of sArr and fp is of fArr.

Let’s try printing the elements of sArr from sp.

The 2 lines above are perfectly identical since the index operator is converted to addition then dereference.

Now you might start asking: “How can the second element be accessed when sp was only incremented by 1?” Let’s look at printing the elements of fArr by fp.

The code is nearly the same with sp. Again, how can the next element be accessed knowing that it’s 4 bytes away and we only incremented the pointer by 1?

When dealing with addition between pointers and integers, the compiler also considers the data type being pointed to. The integer in the addition does not represent the number of bytes, rather, the number of elements. Given the example above, sp is a pointer to a short. Therefore, sp + 1 is not 1 byte ahead of sp, instead, it’s 1 short ahead of sp. Shorts have a size of 2 bytes, which is why sp + 1 jumps forward by 2 bytes. Similarly, fp + 1 is not 1 byte ahead of fp, instead, it’s 4 bytes ahead because floats have a size of 4-bytes. 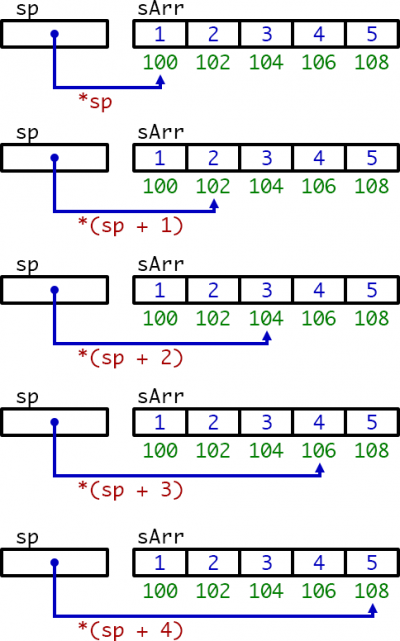 The integer in the addition need not always be positive. It can be negative which means it’s pointing to an element before.

Be careful not to go out of beyonds! Compilation does not check and may work some times. Dereferencing an invalid location is simply undefined and would byte you back in the future.

Since addition is commutative, the following are legal:

Let’s see some application to this.

When we wish to traverse an array of elements, we’d normally do this with indices:

Though this may look efficient already, we could further reduce the operations involved. Remember that the index operator is addition then dereference. But we’re already doing some increment with the counter. Why don’t we combine that.

We’ve eliminated that extra addition for a minor benefit. Traversing arrays this way is common practice, especially when you get to Standard Template Libraries (STL) in C++. Just make sure not to dereference it.

Note: I mentioned previously that it is not advisable to point to elements outside the array. But end here seems to defy that rule. The danger is only when you dereference an illegal location.

If you wish to traverse in reverse, you could do the following instead:

The difference between pointer values is the number of elements between them. This assumes that the pointers have the same base type and are pointing to elements of the same array. Otherwise, the result makes no sense.

The difference above could also be evaluated like so:

Keep in mind that the integer values here represent number of elements and not bytes.

Technically speaking, addresses are treated as unsigned integers. Hence, negating an address makes no sense. It’s like looking for a negative house number or a negative room number.

Here’s a video lecture that I did a long time ago about pointers and arrays.